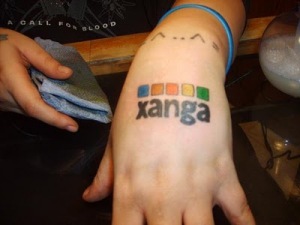 Xanga /ˈzæŋɡə/ is a website that hosts weblogs, photoblogs, and social networking profiles. It is operated by Xanga.com, Inc., based in New York City.

DESCRIPTION
Xanga /ˈzæŋɡə/ is a website that hosts weblogs, photoblogs, and social networking profiles. It is operated by Xanga.com, Inc., based in New York City.

In September of 2013 Xanga relaunched under the assumed name of Xanga 2.0. Xanga/Xanga 2.0 is no longer a free blogging webspace. Users will now have to pay an annual fee of $48.00. The intellectual property of many users has since been lost. Xanga only saved archives from users that posted in the last five years (2008-2013). On their webpage they mentioned the merger, but reluctantly forgot to include their mobile users (mobile app users). Xanga claims they are currently still working on the issue, however they are not forthcoming with a solution plan or an ETA on when they will come to a solution.

As of November 2013, new users can no longer join Xanga via Xanga's only current user solicitation at Crowdhoster. The "Join In" buttons are now no longer functional and the number of "backers" has been constant at 1,175 for several weeks.

Xanga is clearly doomed. Only its date of proximate closure is still unannounced.
ACTIVITY